Europe is supplying its own grapes for around 15-18 weeks per year, while overseas supplies the other 36-40 weeks. “We are currently in the heart of the European season, by November we will switch to overseas grapes.” During this time of the year, the European grape market is mostly split between Italy and Spain, Claure explains: “The main difference is that Spain started to use newer varieties a few years before Italy. Thanks to their new and more productive varieties they have bigger volumes available than their European competitors.”

A specialty among the newer varieties is the Itum-line, which was developed in Spain and has a very intense flavor: “This makes Itum grapes to a viable competitor of varieties from the US or Israel. For good reason it is currently the only breeding line that is being exported from Europe to Latin America to be cultivated onsite,” indicates Claure. While this variety is not yet a staple on the German market, it takes England by storm.

Nowadays one of the most important aspects for new grape varieties is that they need to be seedless. A development that only became possible in recent years, Claure recalls: “Seedless grapes are better in terms of convenience, but only a few years ago they could not keep up in taste. Now, the taste has a higher value for breeders and they try to combine the tastes of old varieties with seeds with the convenience and productivity of new, seedless varieties.”

Breeders need to find a balance between the taste of consumers and the right attributes for growers and retailers: “Muscat grapes are difficult to replace because of their unique flavor, but they are difficult to market due to their short shelf life. New varieties have a better productivity and better shelf life. The challenge for the grape sector will be to find varieties that can accomplish all of these things.” There are many new varieties on the market but in the future, he expects that only a few will actually make it beyond their initial tests. Claure does not think that all club varieties will play a big role in the grape sector: “Some of those varieties are a big investment and many rules need to be followed by a grower– not everyone is able to afford this process. I think the productivity of the plants and the marketability will mark the success of any new variety.”

Italy is the main supplier for grapes on the German market in the summer and fall and shares the overall European markets with Spain without much competition, Claure claims: “Greece almost exclusively grows traditional, white varieties such as Thompson Seedless, Sultana grapes from Turkey nowadays are found mostly on wholesale markets and losing market share on retail. One Reason is the high demand in Russia and Eastern Europe.  From our side, we see increasing interest of red and black seedless varieties by German consumers and this trend we keep in mind for the next months and years.

Until week 29, retailers sold grapes from Egypt and Morocco. Jose Claure explains: “After that point, most of them switch exclusively to EU imports, no matter of the quality. It surely be possible to find premium merchandise from Egypt and Morocco even as far as week 32-33 but the low prices in Germany doesn`t make it profitable for growers.” 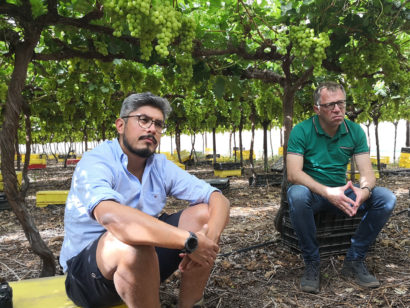